Living in a 150 square foot RV can be a challenge for two adults, but add two VERY LARGE cats in the mix and we literally, are on top of each other.  Fellow RVers and others have frequently been curious about how cats do on the road.  In the beginning, NOT well at all.  It was a mix of curiosity, shear terror and what appeared to be a cat’s version of a panic attack. 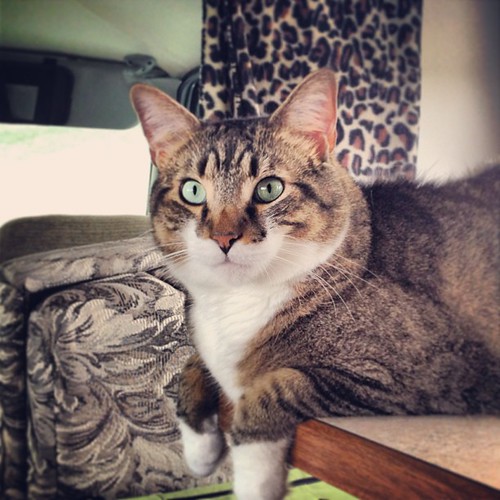 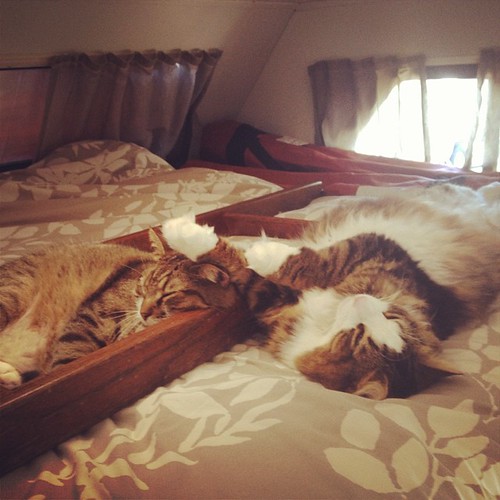 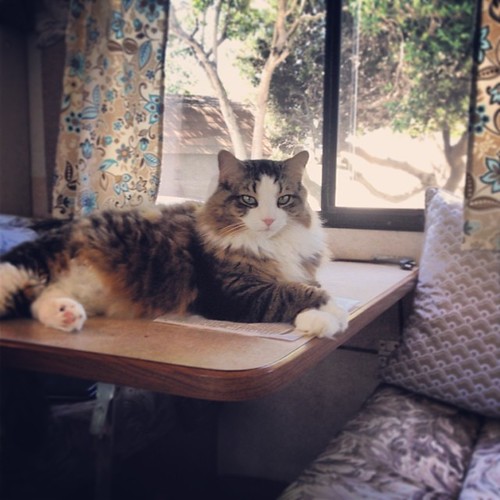 For their entire life, until the first day in the RV, the ground beneath their paws was steady and hardly ever made noise. Suddenly, they were moving and bouncing down the road at 60 mph with strange groans, whistles, and a whole assortment of other-worldly happenings.  We didn’t think there were many places to hide, but it is amazing what a cat (Miso) can wedge itself into when terrified:  sink cabinets, under seats, step wells, and what became their favorite; under the bed covers or wedged between the mattress and the wall, preferably with a pillow on top. This lasted for a couple of weeks, and still happens when the RV is being serviced.  Eventually, their curious nature began take over and they accepted this new fate. 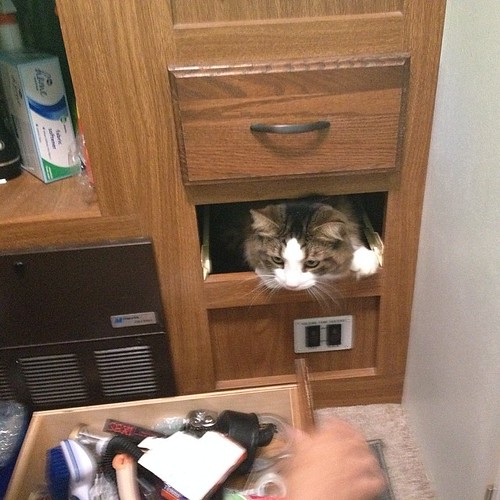 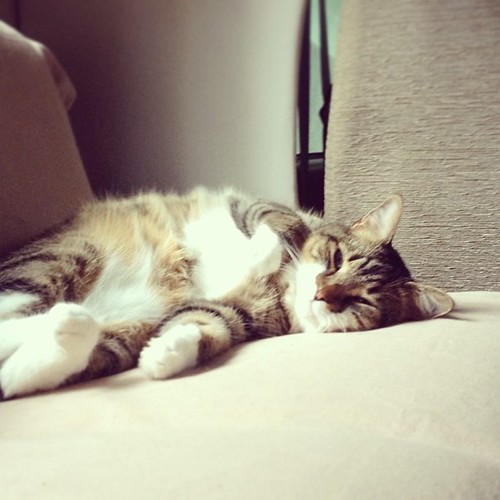 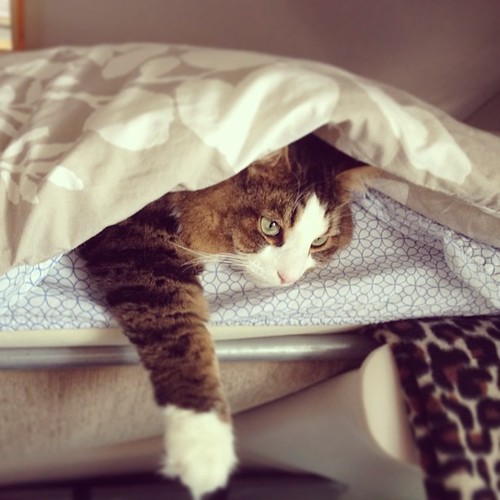 To say our two furry travel companions enjoy the RV lifestyle might be a bit of an over statement, but they tolerate it and occasionally seem to like it.  They nap during travel times and wake up with an almost enthusiastic curiosity when we stop, always appearing let down when it is just a parking lot.  They like grass, greenery, and wild things especially birds.  Both really enjoy the perk of being able to go outside, even if it is on a leash and closely supervised, something they never got to do before. Due to close proximity, the amount of attention they receive has increased exponentially.  We are all very familiar with each others habits, and they have done a terrific job training us to be attentive.  If cat’s memories are as short as they are said to be, Kimchi and Miso probably no longer remember the life on the wide open range (1700 sq ft). 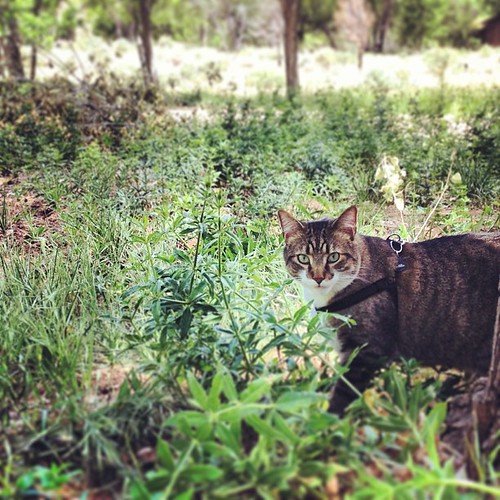 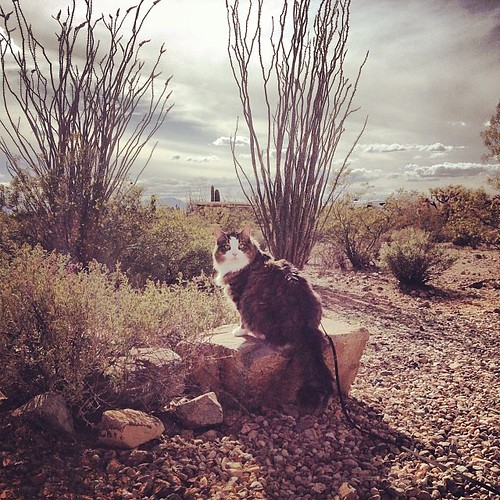 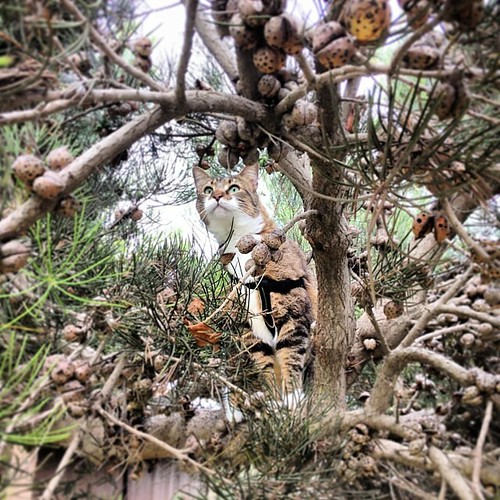 While we could not imagine traveling without our cats, indeed we often make decisions based on what is best for them, sometimes it is tough sharing such a small space.  They are big cats and when they move, so does the whole RV.  When a bomb is dropped in the litter box, it can be a weapon of mass destruction, often riling us from our sleep, helpless other than to say, “EWWWW, damn it cat!”  Since neither is de-clawed, the RV has been subjected to significant depreciation.  Both cats have had health problems and an emergency.  Luckily, qualified veterinarian care is pretty easy to find, but always expensive. Shedding, messy eating, and litter box use prompt multiple cleanings daily, but that only takes a few minutes.  Despite all this, we enjoy their company immensely and we think they feel the same. 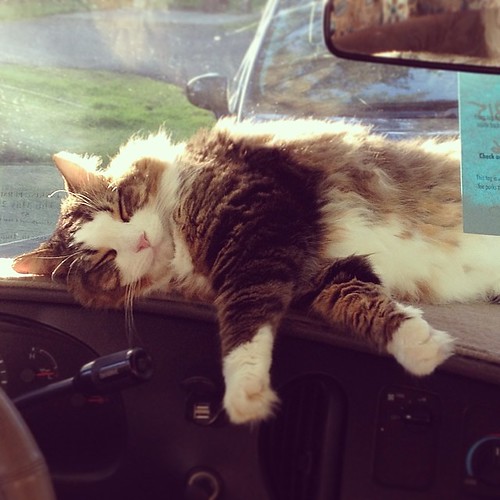 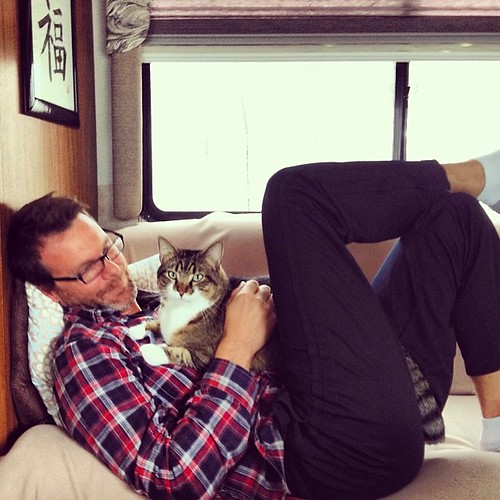 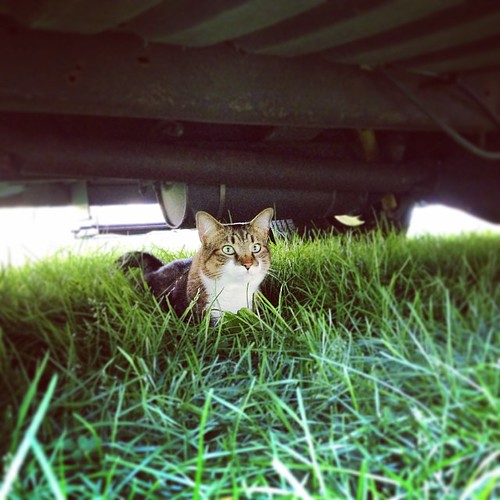 8 thoughts on “Fulltime RVing with Cats”